Small happennings in bird world on the hill

A couple of funny/cute incidents occured recently.
On an afternoon recently (hot and dry), I heard a strange tapping outside the house in the front.  Wondering if it was a cat or a crow, I peeped through the window to find a Rufus treepie pecking at the side mirror of my car!  I went out as quietly as I could to take a picture, but it flew away.  This happenned again a couple of days later, but on my husband's car mirror.  This time too I was not quiet enought to get a shot.
The other day, while our plants were being watered I notice that there was small leak in the hosepipe and the water was coming out in a tiny shower.  Since someone else was watering the plants, I got the opportunity to see a really cute sight.  I watched a sparrow come and alight near where the water was spouting out of the leak.  I thought she was drinking water.  Then she shook herself and I realised there was a smaller leak near where she was and she had been having a pleasant shower.  It was so sweet.
Posted by hillgrandmom at 5:58 PM No comments:

The best of what I could get 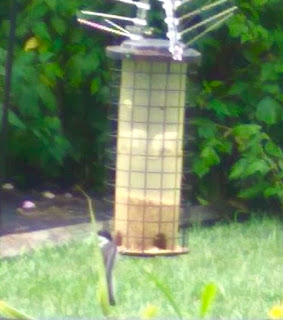 A chickadee at the bird feeder after those spikes were added to keep the squirrels away--it did not! 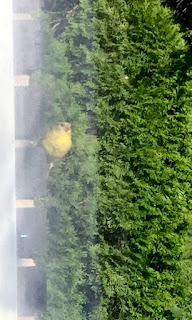 A chaffinch looking at me through a cloudy window. 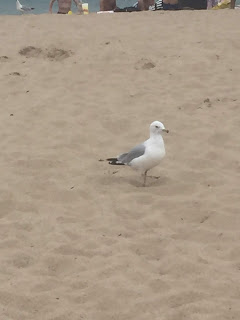 The usual gull around Illinois lakes. 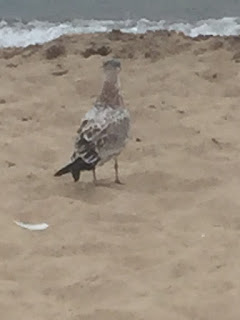 The spotted gull that I saw on the Michigan Lake beach, which google says is a younger bird. 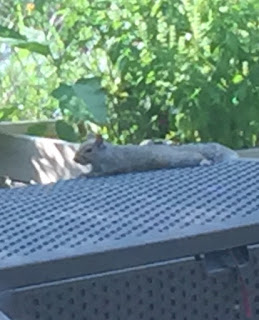 The naughty squirrel lying on the outside cushion box after her depradations on the bird feeder.


Posted by hillgrandmom at 12:47 PM No comments:

I was in the Chicago burbs almost 2 months.  As my son has a bird feeder in the backyard and that too quite close to the house, I got to see a number of native birds.  I did a little googling to identify the birds I might see.
I was so happy to be able to spot and identify many birds.  The most common birds to visit the the bird feeder, were the sparrows.  Of course there were many robins around.  But one site I looked at said that robins don't come to the feeders.  Then there were a pair of house finches.  I loved the splash of red on them.  Mourning doves came fairly often.  A cardinal pair visited almost every day.  I saw a couple of gold finches.  I noticed a black-capped chickadee and I was lucky enough to spot a woodpecker on my last day.  The only thing was it was a bit too far for me to identify the specifc one it was, though it might have been a downy woodpecker as it was quite small.  I did spy in their backyard a really tiny bird, a sort of humming bird I think.  There were the occasional grackles and a european starling.  In the park and at the lake near where they live, I saw a band of American crows and the red-winged blackbirds.  They are such beautiful birds.  The mandatory geese and ducks were there.  But those I have seen and noticed over the 7 times we have visited.
There were gulls near the lake and they all seemed to be grey and white. So I was surprised to see, at the beach near Lake Michigan, in downtown Chicago, the grey and white gulls and some who were spotted.  When I googled it, it said that the spotted ones were the younger gulls, which seemed amazing as some of the spotted gulls were as big, as the grey and white ones.  I must say the gulls there were really raucous and so used to people feeding them, they were almost aggressively begging for scraps.
I just loved the show the birds put on for me every day.
But also fun were the antics of the squirrels at the bird feeder.  One particular squirrel was very bold and so very hungry.  Then one day I noticed her teats and decided she must be pregnant or feeding and stopped chasing her off the feeder.  I used to occasionally feed her the kids' leftover cereal.  She got quite used to me and usually stayed in the vicinity, even if I was sitting outside.
I really wish I had had a really good camera to take blog worthy pictures of the birds I saw.  What I did get was not too good.  I'll post the pictures of the birds and the squirrel in my next post.
Posted by hillgrandmom at 6:56 PM No comments: 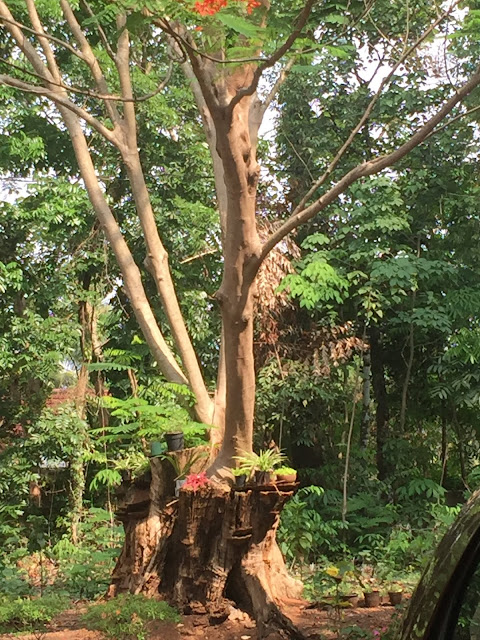 This tree of mine is like a Phoenix.  the branches have been lopped off at least 3 times.  As the branches used to grow too near the house, and the tiny leaves blocked the roof tiles, I have had to cut the branches often.  After the last cut, the tree again began sprouting and now it is full of flowers.  It was a favourite of my eldest son, who passed away.  He used to be upset every time I chopped the branches.  He would have been happy to see it now. 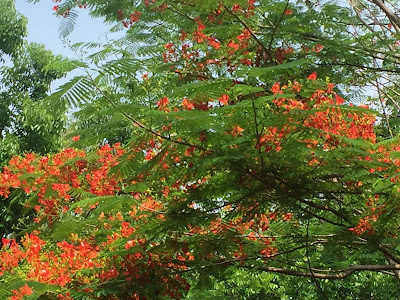 Posted by hillgrandmom at 8:37 AM No comments:

These furry friends kept me company on walking up, up, up the hills, and just sitting quietly by me whenever I sat on the verandah.  But of course the little pup never sat quietly.  But she loved with her whole self. 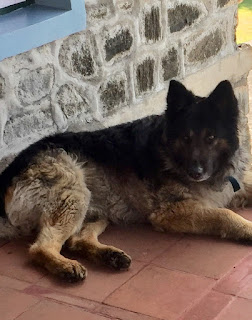 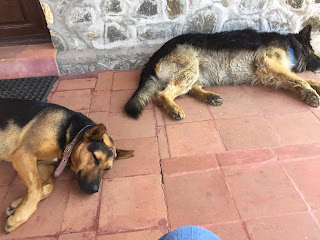 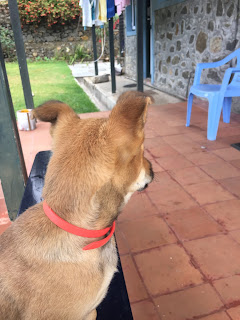 Posted by hillgrandmom at 4:12 PM No comments:

Pictures from my one week relaxed holiday in the hills 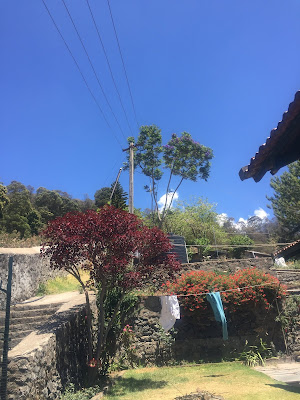 Visitors in the garden-- 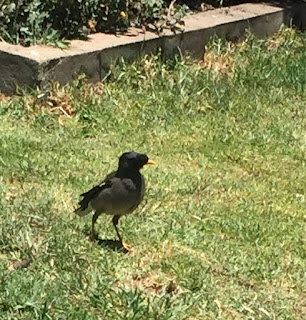 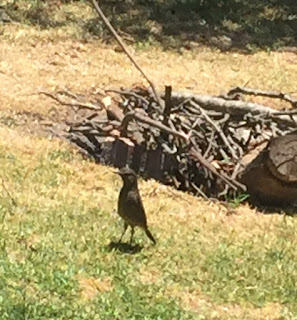 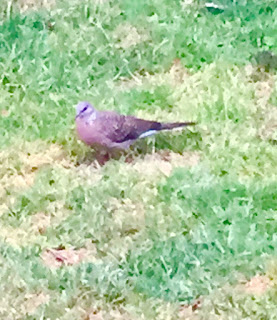 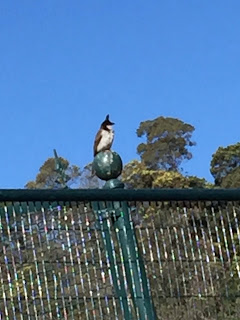 A pair of bulbuls were nesting in a hanging creeper with the red flowers( in the first picture). 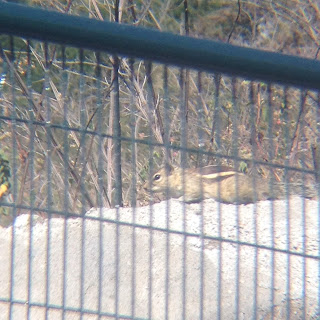 A watching squirrel who came down to the grass later, to be chased by the bulbul as it ventured a little nearer the nest, though way down in the grass.


Posted by hillgrandmom at 2:03 PM No comments:

I have been in Kodaikanal for a week, enjoying the pleasant weather after the heat of the hometown.  I will post pictures after I get back home, as the con of this place is that the internet is very slow.
Posted by hillgrandmom at 4:08 PM No comments: